(Posted 2016) Everyone wants that elusive viral video. But actually, just adding video into your marketing plans can do wonders. It’s time for you to make video a priority in 2016. Some trends…

The big picture: Cisco predicts that video will make up 69 percent of all consumer internet traffic by 2017. It’s hard to find a statistic that doesn’t show web video is booming.

For nonprofits, you could be doing way more with video than just posting one on your homepage, and projecting it at your annual fundraising gala. Bring video out to your social media. More than half of nonprofits are planning to create more video content today than a year ago.

Primary content marketing has moved to video. Brands are becoming content curators. Companies are not only producing their own videos, but also asking customers — their brand ambassadors — to create and post video on social media. Invite people to produce a video that supports your work – that’s a strong testimonial for your product or cause. To realize video’s full potential, cross-promote your videos across multiple channels, and make them easy to share.

Everything is moving to mobile. In 2015, the number of YouTube videos watched on mobile devices increased 100 percent. Conventional wisdom used to be that people with phones and tablets would watch only short videos, but they’re now watching long-form videos too.

Bottom line: Businesses and nonprofits are finding that video is far more engaging than text. Nielsen says 64 percent of marketers expect video will soon become the centerpiece of their strategies.

Social Media Today has some great stats on the use of video in marketing.

You can read more information on video marketing at the MarketingProfs website.

And in one of my classes at the University of Washington, we watched this video about the Social Media Revolution.

Mary is a freelance video producer in Seattle. She creates videos for you that help your business or nonprofit grow. Visit her LinkedIn page, and see her videos on Vimeo. You can reach her at Mary@MaryJPeterson.com. 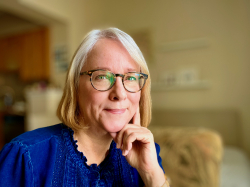 Mary
Mary Peterson Video Productions is based in Seattle. I help you create engaging and effective videos for your business, nonprofit or organization.

Latest posts by Mary (see all)

Deprecated: Directive 'allow_url_include' is deprecated in Unknown on line 0